While attending Tacoma’s first Mayoral Candidate Forum on LGBTQ+ issues in 2017, then-candidate Victoria Woodards met a sixth grader with a clear vision for her community.

“Youth are not included in the decisions and policies that impact our daily lives,” says Stella Keating, the now eighth grader who became the impetus for the Mayor’s Youth Commission, formerly the Mayor’s Youth Taskforce.

“Most adults don’t see kids and teenagers as leaders. I want that to change.”

Announced last fall, the Mayor’s Youth Commission is a rare opportunity for Tacoma residents ages 13 to 19 to develop a deeper understanding of local government and make recommendations to the city council for future changes. In total, 126 applications were submitted by youth, representing every high school and region of the city.

Since its launch, four committees have been established within the Youth Commission. The Outreach Committee is responsible for maintaining an online presence and educating city officials on how to best reach younger audiences. The Justice and Safety Committee focuses on the school to prison pipeline, police response practices, and school safety features. The Arts and Culture Committee is interested in how the newly-allocated Tacoma Creates funding can support young artists. Last but not least, the Social and Environmental Health Committee brings critical focus to youth homelessness, housing, bullying and drug abuse in the community.

“Our meetings are centralized on finding solutions for any problem in the city,” says Sean Graves, a youth member of the Commission. “The reason why we focus on solutions is because they can be reshaped into policies and bring new ideas for new change.”

During their monthly meetings, youth learn about civil discourse and how to be more effective advocates and communicators. Although adult facilitators are present to support and guide the sessions, this Commission is completely youth-led.

Youth members will have the chance to meet with community leaders from Tacoma’s Housing Authority, Police and Fire Department in March to talk more about how they can organize, create change and further refine their goals.

Bucoda Warren, Management Fellow for the City of Tacoma and organizer of the Mayor’s Youth Commission explains that once the structure is in place, the students will start taking on projects and policy ideas — developing their ability to bring recommendations directly to the city council.

The evolution of the Mayor’s Youth Commission has been yet another example of what happens when the community comes together around a good idea. Community leaders and volunteers that span all four of Graduate Tacoma’s Collaborative Action Networks have thrown their support behind this important chance to elevate youth. In addition to the City of Tacoma, the Asia Pacific Cultural Center, WorkForce Central, Cities United, University of Washington Tacoma, Tacoma Public Library, Foundation for Tacoma Students, and more have offered their time to assist in facilitating meetings. Partners from the City of Tacoma Public Utilities, Tacoma Public Schools, Metro Parks, REACH Center and Boys & Girls Club have also reached out to raise money and provide incentives for youth members.

“The entire community benefits from their voice,” says Mayor Victoria Woodards. “I remember being a kid and not having lots of ways to be engaged. For me, personally, it’s about giving kids an opportunity that I didn’t have.”

With this in mind, Mayor Woodards makes sure to dedicate time during each meeting to speak with the youth and answer any questions they may have.

“People always say that children are our future, and I don’t believe that,” she says. “I believe that the youth are our now. We can’t wait until the future to engage them. Frankly, we’re late. The time to do this was a long time ago, but we’re just now finally doing it.”

The mayor has plans to further amplify youth voices in Tacoma by developing a citywide youth summit where hundreds of kids from all ages will have the opportunity to use their voice and talk about what they want from their city and how to create better policies. She hopes that members of the Youth Commission will help plan it. 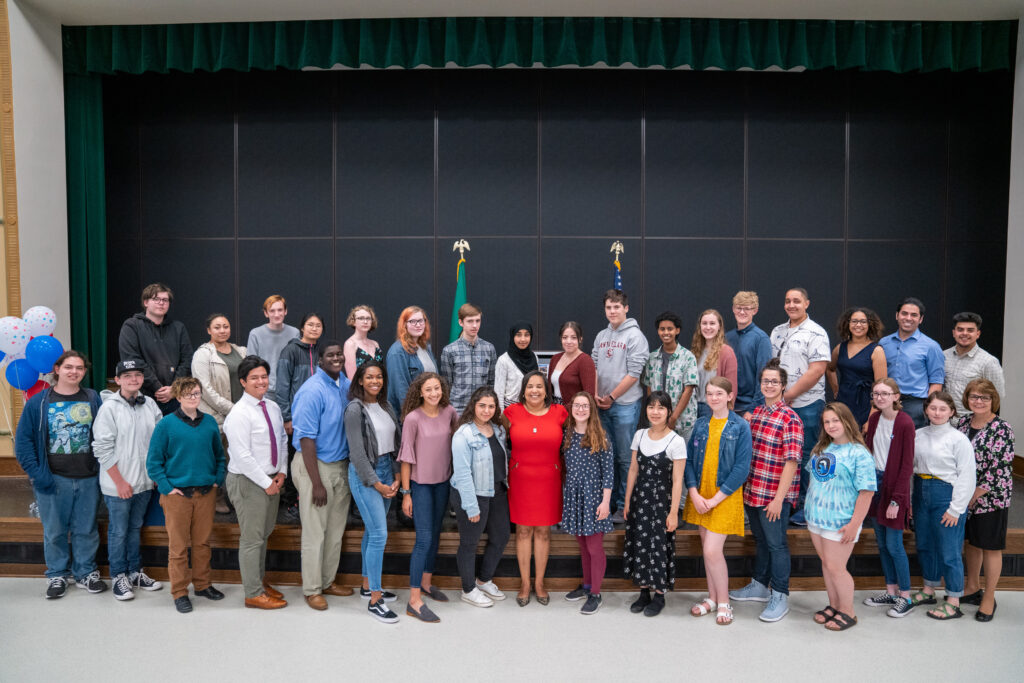 “I hope, and know, that the Youth Commission is going to raise awareness around the need for youth to be in the bigger picture,” says Stella. “I know what it’s like to be shut down and not listened to just because I am young. What adults need to learn is that sometimes it is better to have youth talk because we bring issues into a different perspective. Our experiences are of equal value to the adults around us.”

Stella is no stranger to challenging the status quo. The 14-year old transgender girl began sharing her story with media outlets, such as Teen Vogue, at 7 years old to bring awareness to transgender and gender diverse youth. She stood beside former Washington State Governor Christine Gregoire as she signed marriage equality into law. While in the fourth grade, she testified before the Tacoma School Board about safety and inclusion.

“The coolest thing about the Youth Commission is how diverse it is,” says Stella. “Our city government, groups, and organizations that represent Tacoma need to look like the people they represent.”

Although the Mayor’s Youth Commission is still in its early stage, the future looks bright for this new generation of leaders in Tacoma.

“By creating a task force led by youth, we are one step closer to including youth on everyday policies that affect not just youth, but everyone,” says Stella.

Contact Bucoda Warren  Bucoda.warren@cityoftacoma.org to learn how you can support the Mayor’s Youth Commission or to offer community space for future committee meetings.