Space is only 50 to 62 miles away depending on the measurement one uses. The cosmos is infinite and ever expanding. And yet, despite its size and relative closeness, the universe feels out of reach for many, a thing belonging to daydreams and childhood fantasies.

In the run up to the fiftieth anniversary of the Apollo 11 moon landing, the NASA-funded Northwest Earth and Space Sciences Pipeline, organized the Apollo Next Giant Leap Student Challenge (ANGLes). Among the project’s goals, “to increase pathway for students towards careers in STEM, particularly in underserved communities.”

An adviser asked Lincoln High School senior Marisol Rivera if she wanted to participate in the challenge. The Graduate Tacoma STEAM Learning Network had organized a team consisting of students from Lincoln and Mt. Tahoma. This was last spring and Marisol’s schedule already included school, water polo and working as a life guard for Metro Parks. “I had some experience with coding and had taken a robotics class in eighth grade and liked it, so I decided to get involved,” said Marisol.

Marisol joined a team of nine others that eventually dwindled to six. The group donned the name “AstroAphelion.” Challenge participants were tasked with piloting a drone across an 8-by-10 foot map of the moon’s surface and landing on the spot where Apollo 11’s lunar module touched down on that summer night in 1969. Participants then had to place a cultural artifact on the faux moon using a Lego robot they programmed. Once completed, the robot had to pick up a rock sample and bring it back to the drone where it had to be identified. All of this had to be completed in under 10 minutes.

NASA’s history is full of setbacks, mistakes and catastrophe. AstroAphelion experienced their fair share of challenges, albeit on a smaller scale. “It was pretty messy in the beginning,” said 17 year-old Lincoln High School senior Abby Loboda. Marisol echoed this sentiment. “We had to completely start over a few times,” she said.

The budding rocket scientists were not deterred. They watched a seemingly endless number of YouTube tutorials and also got assistance from a University of Washington Tacoma student. Marisol, Abby and the others stayed late and arrived early. All this while juggling competing schedules that made meeting as a group difficult. “It was stressful at times but we couldn’t give up, we had to keep going,” said Marisol. 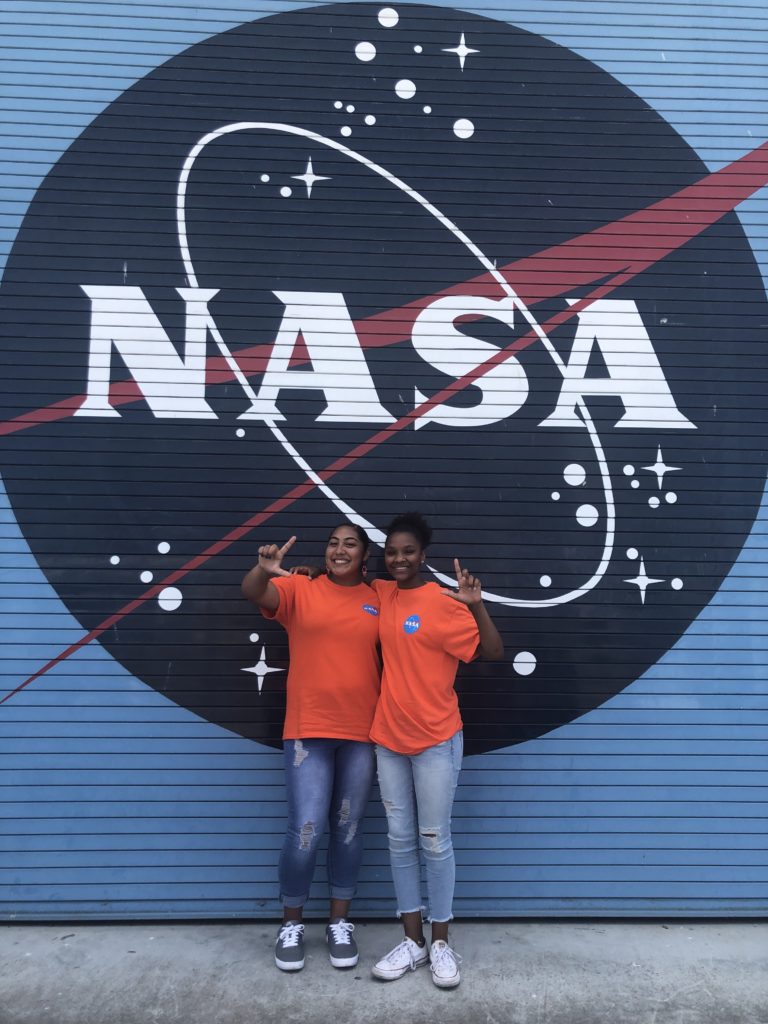 The team competed at a local competition for 5th to 12th graders at the Eastside Community Center which served as a feeder for the regional event at the University of Washington. They won. In mid-July the group took first place for high school students in Washington and won second place overall. For their efforts they got to visit the NASA Ames Research Center in California earlier this month.

“Surreal,” is the word both Abby and Marisol used to describe their visit to the Ames facility. NASA Ames is generally closed to the public but members of AstroAphelion got to tour parts of the complex. “We got a chance to see inside a pod that astronauts used in a simulation,” said Abby. “It was mind blowing to see what an astronaut would see.”

Maybe they didn’t go to space, at least not yet, but the experience of participating in the challenge did widen Abby’s and Marisol’s orbits. “The NASA you see in the movies feels unreachable, but the one I saw was different,” said Abby.

Marisol put it this way, “I could see myself at NASA.”

Eric Wilson-Edge is a content specialist for the University of Washington Tacoma’s Office of Advancement. UWT is a Lead Partner and member of the Graduate Tacoma STEAM Learning Network.

Subscribe to our email newsletter today and be the first to hear about the latest news, announcements, and happenings in the community.